Violence, peace and yoga in Lansing

The Keep the P.E.A.C.E. march against violence was Saturday.

Emily White and I attended the march for Just B Yoga in support of our neighbors and neighborhoods.

The gathering was more emotional than either of us bargained for. Surrounded by victims of homicide we walked through some of Lansing’s East Side neighborhoods chanting “Stop the violence!”, “Keep the peace.” Children smiled and chanted with us. Some folks came out on their front porches to see what the hub bub was about.

And while it wasn’t a Million Man March by any means in terms of numbers of participants, it was a powerfully moving to be a part of.

At the Foster Community Center, where the march ended, people who had marched with us took the microphone and shared the stories of their loved ones – shot and killed too early like Amaia Edmond at the age of 7, or the victim of senseless violence outside a nightclub like Ygnacio “Notch” Bermudez Jr.

So much hurt and suffering for such a small city.

The message was to stop the silence – speak to one another, help one another, share information when you have it. 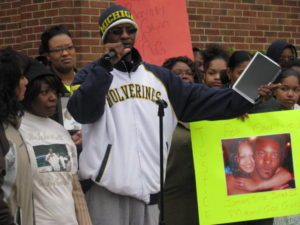 As a working journalist in Lansing, I felt I knew most of the stories that were shared by the families yesterday.

But what I hadn’t truly felt was the pain. The pain of a grandmother expressing she would have gladly given her life for her grandchild. A cousin begging a community to come forward with information so families aren’t left in the dark without answers on top of their anguish. 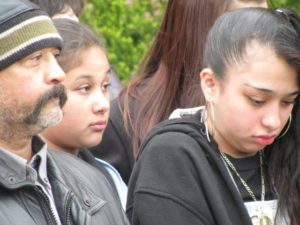 I was also struck with how few people I know on my own block.

We will change this. I will make sure I know my neighbors and their children’s names. I will see whether we have a Neighborhood Watch and join it. I will go to neighborhood association meetings.

I lived my practice of yoga yesterday and found I have a LOT more practice to do.

One thought on “Violence, peace and yoga in Lansing”