Just B Yoga founder nominated for Tribute to Women

Tonight I will attend the “Dream, Girl – Reach for the Stars” Tribute to Women award ceremony by the Women’s Center of Greater Lansing as a nominee.

I am humbled to receive this nomination for so many reasons.

According to the nomination application, “the award recognizes local women who have shown the 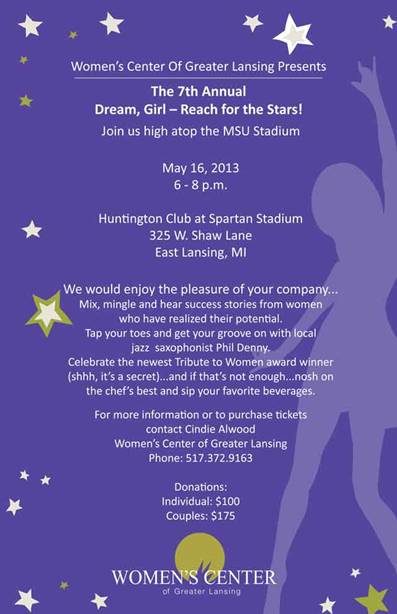 My fellow nominees are power hitters in Lansing contributing and changing our community for the better.

These strong, passionate women deserve recognition for their courage and commitment to our community.

I can’t believe my name or Just B Yoga is in the same league with this group of leaders and game-changers!

I merely want to share  yoga/tai chi/meditation in hopes it helps us find wellness and maybe decrease some stress. We have a humble yoga studio on the other side of the tracks. We aren’t clothing the homeless or helping people find jobs. We just help them learn to breathe and move and maybe find a way to smile in rough times. We accept donations so money is tight.

Then I read Yvonne LeFave’s nomination and see Just B Yoga and Free Being Yoga Network through her eyes.

“I’ve watched Belinda Thurston take a dream of hers and make it grow into something beautiful. She left a high-stress position with the media and opened up a yoga studio. Not just ANY yoga studio, but one in a troubled neighborhood — and made the studio donation-based… She’s taken a low-impact practice and used it to make an impact, a positive change, in her immediate surroundings and in Lansing as a whole. She’s built community where once folks lived in isolation… She’s used yoga as a vehicle to reach out to youth, to the homeless, those who typically would not see themselves as yoga practitioners: folks who are bigger or taller or older; folks who are all shades of the human family rainbow; folks who are gay, lesbian, bisexual, transgendered or questioning; folks who are struggling with addictions and/or depression and anxiety. I’ve seen such a variety of folks come to Just B Yoga with whatever their struggles may be and for a time … just be. What a gift she brings to Lansing!
Belinda is a powerhouse community-builder. She finds ways to bring folks together. Even the disparate yoga studios in the area (most would see them as competitors) have come together under B’s tutelage and mad organizing/business skills. This past year, a yoga passport was instituted by B as a fundraiser for her nonprofit work that allowed a purchaser to take classes at a variety of studios in the area. She brings folks in with a community garden in the back of the studio, or invites them to explore doing yoga with their dog. And just for even more fun or for those who want more of a challenge, she partners yoga with a DJ and hip hop music. She’s even made her presence known by leading t’ai chi warm ups before the annual dragon boat races… and I reckon I’ll get an earful for this nomination!”

No earful Yvonne. Just a heartfelt thank you for sharing the vision of Just Being with us. (Yvonne is a member of our Warrior Co-op )

I embrace tonight’s event as an opportunity to spend time celebrating and getting to know people who are serving with positive action.

In the end, it’s our collective efforts that shape our community, create our sense of place and make a difference.

(Please volunteer for the Women’s Center or give a donation. I believe in the Women’s Center and know the need is great in Greater Lansing. Women and families need a safety net for career help, housing, healthcare, protection from violence and more. have had the pleasure of working with Cindie Alwood, director of the Women’s Center, a few times for yoga events for women in the community. They really do provide an invaluable service.)