The covered vehicle is a pedaled tricycle with solar power assist for extra juice! There’s disc brakes, sideview mirrors, and a little cargo space in the back. 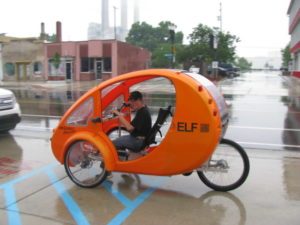 (Apologies for the quality of this video)

Yvonne has been a passionate zero-carbon traveler for a number of years  now, getting around to work, shop and play with a bicycle.

She is often seen coming to yoga class with her utility bike, especially built for hauling and carrying. 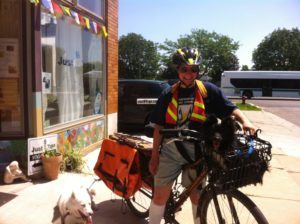 She even carries or walks her dog alongside.

I guess now the doggies can jump in the back cargo area and  ride along in style!

Yvonne said she was one of the people who helped ELF get launched by contributing to a Kickstarter campaign and she got to be among the first to order the vehicle.

UPDATE: Yvonne just posted on Facebook “Well, there’s often a price to pay for being on the “bleeding edge” of technology. The reporter from the (Lansing State Journal) called today to say he was contacted by a representative from the Michigan State Police saying that, in her estimation, this should be classified as a moped under Michigan vehicular law. Since it’s the first one in the State, and since other electric-assist bicycles don’t require a moped license to my knowledge, I think it sets a bad precedent for me to automatically license it as a moped without consulting some bicycle lobbying and green gurus. It’ll be parked until we iron it all out.”

Keep your fingers crossed and let’s push for this innovative, green vehicle to be allowed on the roads.

Kudos to Yvonne for being a trailblazer for green transportation.