Thank you to the Lansing police bike patrol in Moores Park

According to the neighborhood Facebook wall, two young men were just apprehended.

One neighbor posted: “They were found with a backpack carrying about 6 or 7 guns and several knives…What the heck! Is going on ?”

But he also added: “Seemed as if the cops on bikes were a big player…WE NEED MORE!”

I was just driving on Mt. Hope on the way back to the studio. I had just passed Beal and noticed two people in bright yellow shirts on bicycles emerging from an alleyway.

They turned onto Bradley and I decided to stop and take a picture.

They actually then turned up an alley that I was going down to catch up to them.

I rolled down the window.

“Have you always been patrolling around here on bikes or are you here in response to the breakins?”

One male and one female officer were laboring up an incline toward me.

“The breakins,” the male officer said.

“Thank you!” I shouted as they went past my car.

It’s almost 80 degrees outside and sunny. The sweat was glistening on both of their foreheads.

They smiled and said “you’re welcome” as they kept going.

There have been a string of breakins in the Moores Park neighborhood near Just B Yoga.

According to WILX, “Thieves are hiding in thick bushes in backyards and alley ways throughout Moores Park.” And there have been six breakins in the last month. 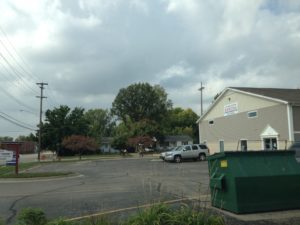 Considering the budget cuts in various departments, including the police, I was struck with a deep sense of gratitude when I met these two officers. They were out of their cars and pedaling our streets and alleys.

They became people, neighbors themselves, keeping vigil over neighborhood. Inside their cars, police can often feel less human, more a part of the machine.

On bicycles I could see their faces, their smiles, their sweat.

They were sweating for us today in service.

May we all practice patience, humility and gratitude as our community handles this recent rash of violence.

Take a moment and thank an officer if you see one. Offer them a smile and let them offer you one in return.