The deep freeze as a practice

As I was posting on Facebook that the studio would be closed again today I was reflecting on patience and surrendering to what is.

These past few weeks have pitted man versus nature. 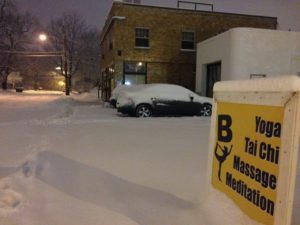 We know nature will always win, but man often refuses to tap out on the mat.

I see this deep freeze as a extension of practice. “Snowbound Asana” as my friend Tara said.

We’ve endured an ice storm that preceded Christmas and left thousands without power for upwards of 10 days. Then we weathered an intense heavy snow on Saturday and Sunday (15-18 inches in Lansing). That was then followed by historic subarctic temperatures (-35 F windchill this morning).

The universe is literally telling us all to “Freeze!”

But it’s so hard.

We’re such a “go” and “do” society. Our self-worth is tied to our amount of doing. And we feel like we have to prove we can defy the odds and the elements.

But do we really?

This took a while to sink in for me.

I own a donation-based yoga studio so revenue is random and fluctuating.

But my business is also my practice, which is a gift and a conundrum at times.

Sunday, while the snow was still coming down I encouraged people not to drive their cars but that if they wanted to come practice I’d give a month of free yoga to anyone using skis, snow shoes, dog sleds and even a snow mobile. Several took the challenge. It made for fun social media photo ops and conversation pieces.

But, one student and a yoga instructor got stuck in the snow and needed help digging and pushing out.

I also got stuck that night and spent more than an hour in a frozen panic trying to free my car from a snow drift, worried about how or when I would get home, all while the frozen sensation in my hands set in and truly scared me. My survival voice started to shout, “This isn’t safe!”

After I got home and found out about the student and teacher getting stuck I had to ask myself, was it worth it? Was being open worth it? Was encouraging people to come worth it?

I canceled Monday’s classes. It was 6 degrees and felt like -10. The roads hadn’t been plowed and the temperatures were plummeting.

The city was in a state of emergency.

But Monday a lot of people had to find a way to get to work, work that had skeleton crews at best. I’m not talking about vital jobs – health care, emergency management, transportation, journalism, utilities.  I’m talking fast food, convenience stores, coffee shops, office work.

I’ve observed people stress out over how to get to work, without adequate thought to the safety and prudence of travel.

I’ve also watched people who didn’t have to go to work go nuts at not being able to go anywhere! Cabin fever.

I was one of them.

I thought, well, I closed the studio, I can go play! I’ll ask friends with kids home from school to sled down a hill with me!

By 11 a.m. that sounded really stupid. The wind and subzero temps were not recreation weather at all.

Stillness can make us itch under our skin or literally scream out loud.

Tapas is a sanskrit yoga term that often is used to describe heat and burning away toxins.

But it also can mean sitting and tolerating a space of discomfort. It’s a heat of tolerance. Can we tolerate not getting what we want when we want it?

The 5 hexagram in the iChing is Hsu – Patience.  “Periods of waiting are most fruitful when used for quiet contemplation.”

Can stillness and non-doing not mean conceding weakness or defeat?

The fact of the matter is, it’s lethally cold outside.

I’m sorry if you HAD to leave your houses in these conditions, either under threats from your boss, stipulations in contracts or your own sense of duty.

Many can get work done digitally from home. More workplaces could stand to ease up on a need to count “butts in chairs” as valid proof of working, especially in times like this.

Others will have to scramble, like teachers, when schools reopen, to play catch up on work and deadlines.

I hope you all can find some stillness at home as we ride out this polar vortex. Play games with the kids or just talk to one another. Do science experiments. Curl up and read a book. Look out the window in wonder and reverence at nature and the cycles of life.

Just B Yoga is closed today. Consider this deep freeze as a practice.

The main roads are fairly clear (though icy). There is no threat of more precipitation. But it’s 1 degree outside with wind chills of -35F.

No one should try to come to my yoga class and I shouldn’t want them to.

I will work on my practice of patience and surrendering to this moment. I’m not going to wish for it to be anything other than what it is.  I will drink some tea and meditate. I will pray for everyone to find safe shelter and warmth and sangha. I will practice my practice.