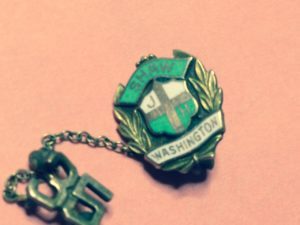 , as an extension of my mindfulness practice.

I want my commemoration this month to be more than documentaries about key figures and moments in history chronicling slavery and the struggle for human rights. I want to honor those in my family who’s daily life may never be detailed in the pages of a history book.

So throughout the month I will share family history nuggets with you. For all intents and purposes, I am the family archive. I have a lot of my mother’s journals and personal belongings since her passing in 2005 and my grandmother’s since her death in 2009. There’s boxes and boxes I have yet to open, others I can’t bear to. I hope to open myself to my story within their history.

I am the great granddaughter of Benjamin Lonesome, who was born a slave. His youngest daughter, Lorraine Rachel Lonesome, was my grandmother; my mother’s mother.

I was raised in Washington, D.C., which once held one of the nation’s most thriving middle-class black populations.

Education was extremely important to my grandmother.  She used to tell me how her father had taught himself to read and used to read the entire newspaper cover to cover every day.

She was proud to have graduated from Dunbar High School where she boasted of learning German and Latin.

But she rarely spoke of schooling before then.

First of all, to have a fancy pin must have cost her family money. But the pin represented pride in being educated and being able to be educated. That’s what I see when hold this pin.

I try to imagine her fastening this onto her collar, probably only for special occasions.

The pin itself is in great condition except a little twist in the metal of the number. I love that the pin has two parts connected by a chain. Very fancy. It bears what I assume is the school crest and the name of the school and Washington.

My grandmother was born in 1920. She grew up through the Great Depression and prohibition and a system of racism and oppression I will never know. Education was something that was hard-fought for. It was an investment into the future. It was a statement of status as a human being.

I had never thought much about Shaw Jr. High as a kid. I’d pass by it without a second thought while riding the Metro bus.

But I Google-searched Shaw Junior High and learned it was originally the first McKinley Tech, a white-only school, and then when McKinley relocated, it was made into Shaw, a black-only school.

Today it is senior housing.

My mother attended McKinley Tech, as a desegregated high school.

I went to private schools through most of my early schooling – Sacred Heart Academy on Park Road and  the Academy of the Holy Names in Silver Spring.  I graduated from Banneker

My grandmother paid for a lot and I got scholarships for the rest.

I was the first person in our family to graduate college. I can remember my grandmother at my honors ceremony with tears in her eyes.

Holding this pin, I realize a little bit more the significance my achievements held for her, and the responsibility I have to honor hers.