Yesterday my brother Baratunde put out a call for ideas for next steps as a community in the wake of the deaths of Tamir Rice, Eric Garner and Mike Brown.

I felt I should have had an idea or two immediately but nothing came. Instead a feeling of futility with a big heavy blanket of anguish and anger held me still.

Then this morning I listened to an NPR report on Ebola in Sierra Leone (black people) and the inequality of access to quality care compared to Europe or America (white people).

“The key… is to maintain that moral outrage — that sense that as long as people are dying, what you’re doing is never enough.” – Dr. Corrado Conceda.

Yes, I’m tying Ferguson to Ebola. The injustices suffered by black men in the U.S. is the same as the injustice in care and treatment of people in Africa with Ebola. And the next steps require SUSTAINED MORAL OUTRAGE.

I teach yoga. Not just body-bending yoga, but the eight-limbed practice of uniting what is fractured, connecting what is disconnected — physically, emotionally, spiritually. The practice teaches us that finding union brings balance and ultimately peace.

The lack of indictments in the cases of Michael Brown and Eric Garner gnaw at my conscious. I’m filled with anguish and anger; desperation and disbelief; sadness and shame. As a 46-year-old black woman I’ve certainly had my share of outrage and experience with  injustice, discrimination and violence. It’s an unfortunate default setting. But these two incidents have proven to light a flame that shines light on what I didn’t want to really believe — we are not improving, racism is alive and well beneath a well-constructed veneer of diversity initiatives, multiculturalism, pop culture and the removal of barriers to access to things (water fountains, housing, education, the presidency).

I’ve struggled to find what I feel my yoga and Buddhist practices guide me to do in action and word and intention. Are outrage and anger Buddhist or yogic? Can I find a way to be “furiously peaceful?”

Community action is building across the country and even in our small community of Lansing.

The Lansing Clergy Forum and affiliate organizations are hosting a news conference at 11 a.m. today “addressing the outcomes of acquitting officers involved in the deaths of Michael Brown and Eric Garner.”

The Lansing Peace Education Center is dedicating its noon peace vigil today to Michael Brown and in solidarity with Ferguson, Missouri. People are encouraged to bring a poem, sing a song, and share local actions and steps you are taking personally to end injustice, or just want to talk with others concerned about the verdict in Ferguson.

I can’t help but stop and wonder, if not doubt, about the effectiveness of marches, speeches, petitions and viral hashtags. (#ferguson, #blacklivesmatter, #ICantBreathe

I try to draw from civil disobedience lessons of the past for nuggets of wisdom, ideas for social action. But they might be futile efforts that serve only to send an echo into our past — a  past view of racism, a past view of inequality, a past view of injustice. We need new tools for this evolved, super strain of evil. I’m not going to say new, because it isn’t. It’s version 2.1. It’s like a virus that disguises itself, lays in wait and in fact has been doing harm undetected until a flare-up occurs. 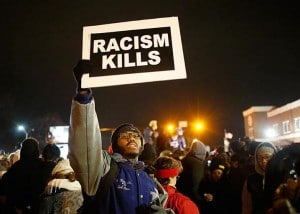 A conversation with Bill Castanier the other day gave me an idea. He was talking about housing discrimination in the ‘60s and what communities black people were allowed to live in or not. He said he thought some people would be surprised to learn that at one point blacks weren’t allowed to live in certain communities.

I said I didn’t understand that surprise. In my experience of living while black, there was always a time when something was denied us and we fought to win the right to access to the house and the things and the titles. We fought to remove the barriers to those things.

And today people people feel it’s over, that we won. Some white people get angry actually feeling “what more do you want?” “You’ve got access to everything.” “You see racism where there isn’t any.”

But we didn’t win.

We won access to the toys in the sandbox, but we can’t make people want to play with us as equals.

Black people have been fighting since the dawn of time to be respected and treated as equals by non-black people.

Sierra Leone is proof positive we haven’t moved the needle in how the globe perceives and treats black people.

Just as Mike Brown, Eric Garner and Tamir Rice were.

If Ebola were rampant in London right now there’d be global action beyond compare.

If the Civil Rights Movement from the ‘60s until now were about gaining access to the thing, we’ve exhausted that. We’ve got the bling to prove it as many rap videos will boast.

It’s time to level up in the game.

Move up the chakra ladder so to speak.

This one requires us to peel off the veneer of stuff and deal with what’s behind the wall.

That’s an inability or lack of desire to respect one another mutually as human beings with a right to exist and indeed thrive. We need to understand what we fear about one another. We need to stop competing and trying to dominate or “win” over one another.

We need to evolve in consciousness and compassion — across the board, all races and creeds.

This requires mindfully engaging in the ugly stuff inside us. That’s the yoga. Connecting with what’s disconnecting us and engaging with it authentically.
And until we can do that in small, intimate kitchen conversations, in social media interactions, water cooler chit chat, in mass demonstrations, as Dr. Conceda said, “we need to maintain that moral outrage — that sense that as long as people are dying, what you’re doing is never enough.”