Recently, while at a protest against the separation of children from their parents at the southern border, I found myself surrounded by friends. It seemed every few moments someone came up to give me an embrace. I was touched at how many people I know from different walks of life, some attached to Just B Yoga, others I’ve known in different contexts.

To see so many be compelled to raise their voices against injustice was heartwarming. We were a show of force with signs and chanting. We lifted our voices in defiance using words such as “resist” and “fight.” 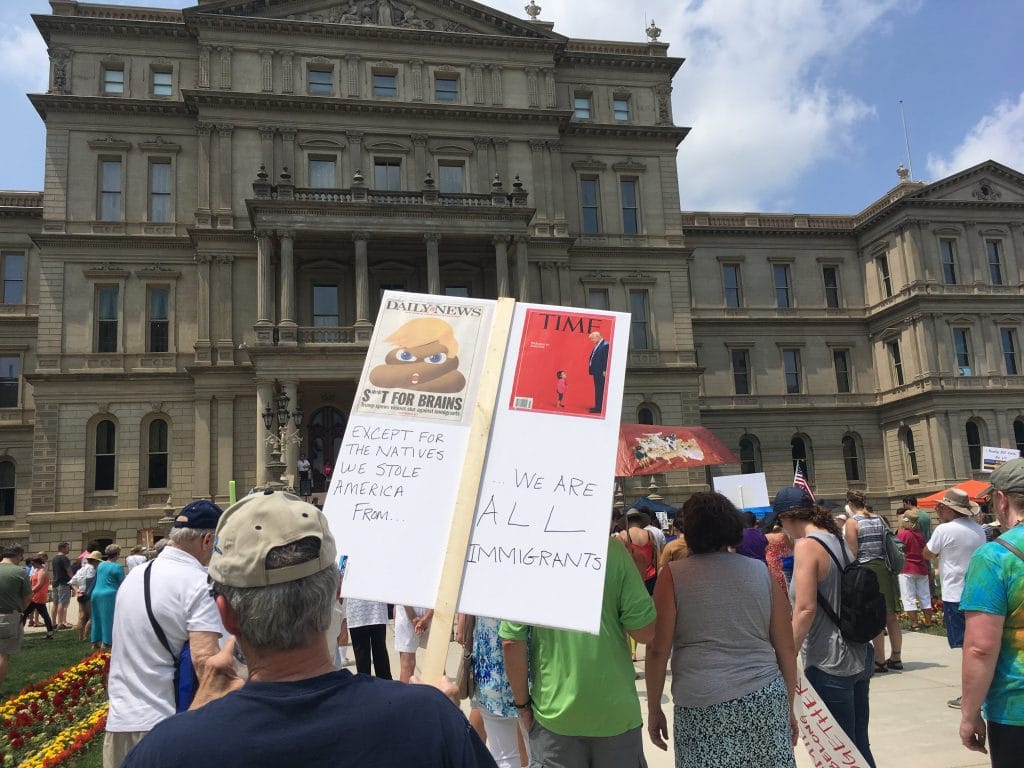 Key ingredients were anger and disgust for “the other side“.

But we were standing in a crowd chanting to ourselves. We were a group of like-minded thoughts and ideas and emotions.

Change cannot happen if we only talk to ourselves. It doesn’t happen in a vacuum.

We are in a futile cycle of protests and counter protests, priming a pump of division and derision.

We are not loving.

As the chasm widens we are less able, experienced and willing to converse or disagree.

Instead we double down on our anger and our distrust of one another. It feels safe. It feels like action.

I am heartened at some chinks in the armor of division that are gaining attention.

There is a lot we can learn from the podcast Conversations with People Who Hate Me.

If you’re not familiar with it the host has a phone conversation with people who have posted nasty and hateful comments on his blog. He engages them in a conversation that is not meant to change minds but to listen to each other‘s viewpoints. It almost always ends up softer and nicer.

Some on the far right are “converting”, like Rev. Rob Schenck, an evangelical who regrets his former militant anti-abortion preachings and mixing them with politics.

He shares some of the uglier parts of his journey including accepting that his preaching contributed to the death of a doctor who performed abortions. He shares the hard reflection he had to take on his spirituality and how he perceived others and what he believed was “right” versus “winning.”

What struck me about his journey was the honesty and bravery it took to look at the hatred inside of himself and how much love it took. And we need to harness that collectively with one another.

Can we learn to love amongst hate?

How do we create more spaces where we are open to seeing one another?

At the very least hearing one another’s voice.

We must be vulnerable enough to feel each other and with each other.

Feel each other as people, with families and loved ones.

That we have families that we have loved ones that we have feelings. It also reminds us that within ourselves we are not truly hateful. We don’t wish ill upon one another. We lose sight of that in this tense environment of division. And we interpret this division of ideas as an assault. As something that has inflicted harm upon us to which we must respond more vigorously each time. It’s like an auto-immune disease where our immune system is out of control fighting against an imaginary infection.

This is real. Our bodies are responding to a very real stress. It’s our fight or flight response. Many new students who come to the studio report this as a reason they want to try yoga.

I had someone reach out to me once and asked if my yoga studio was open to Republicans or people who have a conservative viewpoint. I was rather surprised at the inquiry. I was also rather proud of this person for being so open to asking. They actually did come to the studio once. They were regular people trying to move in their bodies. Trying to feel comfortable in their bodies. But they were worried about not fitting in. They were worried that they would not be welcomed or understood.

This has me thinking greatly about what inclusivity and accessibility really means. Does it mean that we want to create a space that is for one set of people and not others? How do we create spaces that invites everyone to mingle without it being a battleground? Compassionate conversation. Compassionate confrontation. I’m still pondering and chewing on this.

Something has to change.

We like to quote Ghandi’s “Be the Change.” But we must embody it more than quote it. 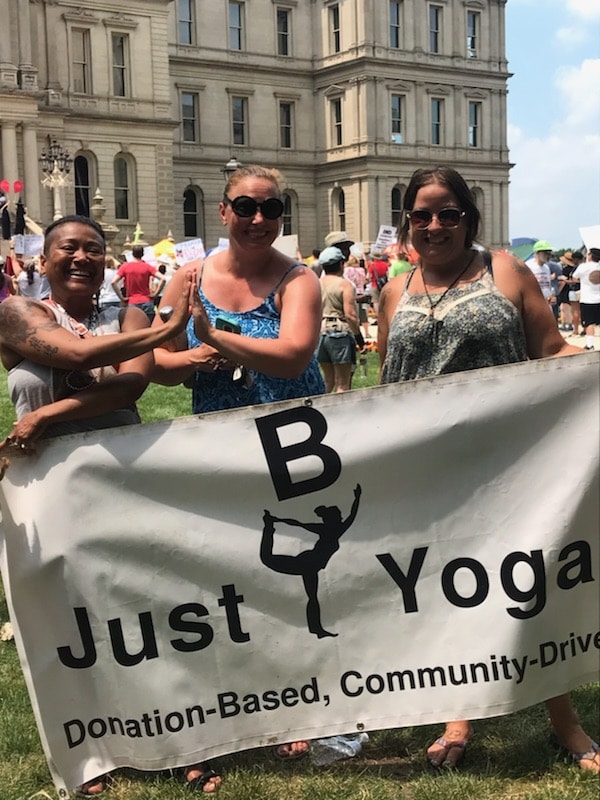 With more people than ever seeking out and practicing systems of connection like yoga and Buddhism does it not behoove us to start to look at how we are using the systems toward a greater good? Not just for our own self healing or feel-good spa treatment.

How do we start to harness our self healing toward a collective healing?

Is this not a key opportunity to practice the first two branches of yoga? The moral and ethical limbs? The Yamas and Niyamas.

Isn’t it too easy to practice non-harming with those we love rather than those we don’t love?

Isn’t it easier to honor truthfulness when we are speaking to one another but be willing to bend the truth when we’re speaking to those we disagree with?

Isn’t it very hard to practice contentment with those we perceive are our enemy?

Wouldn’t these encounters give us an opportunity to study ourselves and the emotions that bubble up and our tendencies? Our samskaras? And isn’t that potentially where the collective and human healing begins?

This is a very Taoist principal and it is very true.

As a survivor of violent trauma I was never beaten into submission. I may have been beaten into silence. But I had to be loved back into love.

This was not an overnight phenomenon. And indeed it is still something that I work on. It is instinct and reflex as a survivor of attack and assault to want to strike back. In fact it feels righteous and deserved. And it took years for me to learn that hatred and resistance as it resided inside of me was taking over my insides. 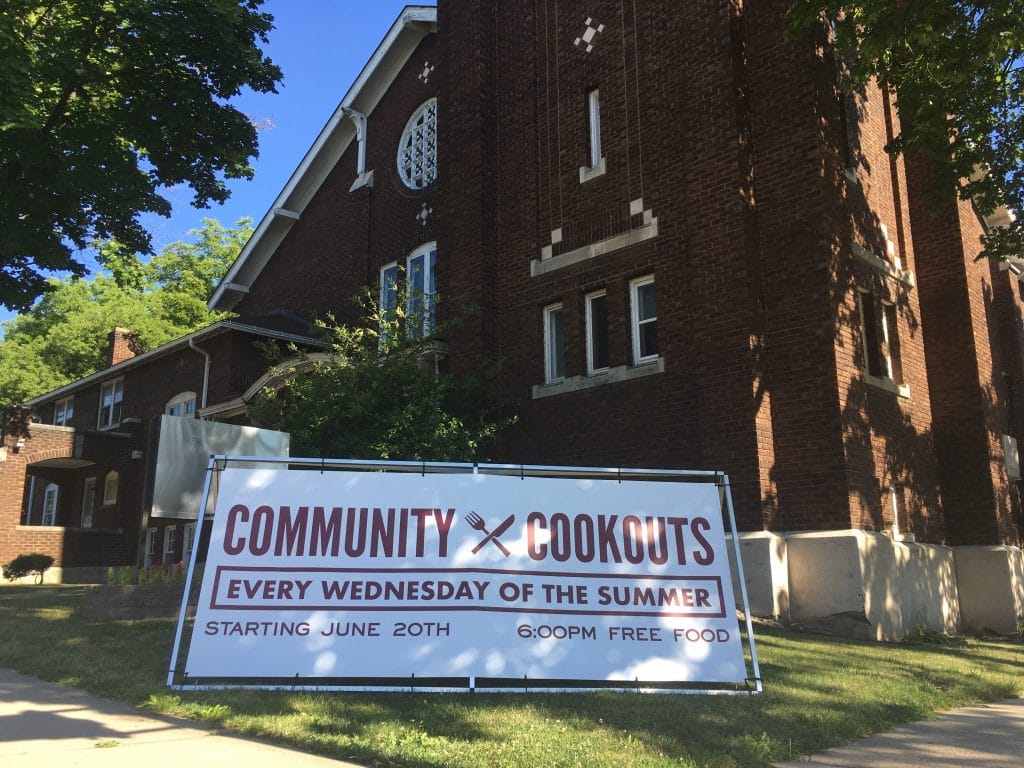 A new congregation took over a church at the corner by my house. I have watched them busily upgrade the parking lot. They’ve been doing lawn care and AC repair. But they also hung out a sign recently that welcomes community potluck dinners. Every Wednesday at 6 PM. I don’t know their denomination. I don’t know what they espouse.

But the gesture is exactly what we all need to be considering. Rolling out welcome mats rather than protest signs and resistance slogans. Could I say hello to the next person I see in a parking lot with a conservative bumper sticker? Could I smile as I passed someone who is listening to Rush Limbaugh on the radio?

Could we all put down our texts and our social media walls and actually see each other face-to-face?