This past weekend we had a lovely gathering of friends and family at the studio celebrating the life of John Bolan and the community he helped grow.

There were gifted visual artists and artisans. There was divine music by Konstantin Polyakov. There was fresh produce and plant starts by local farmers. 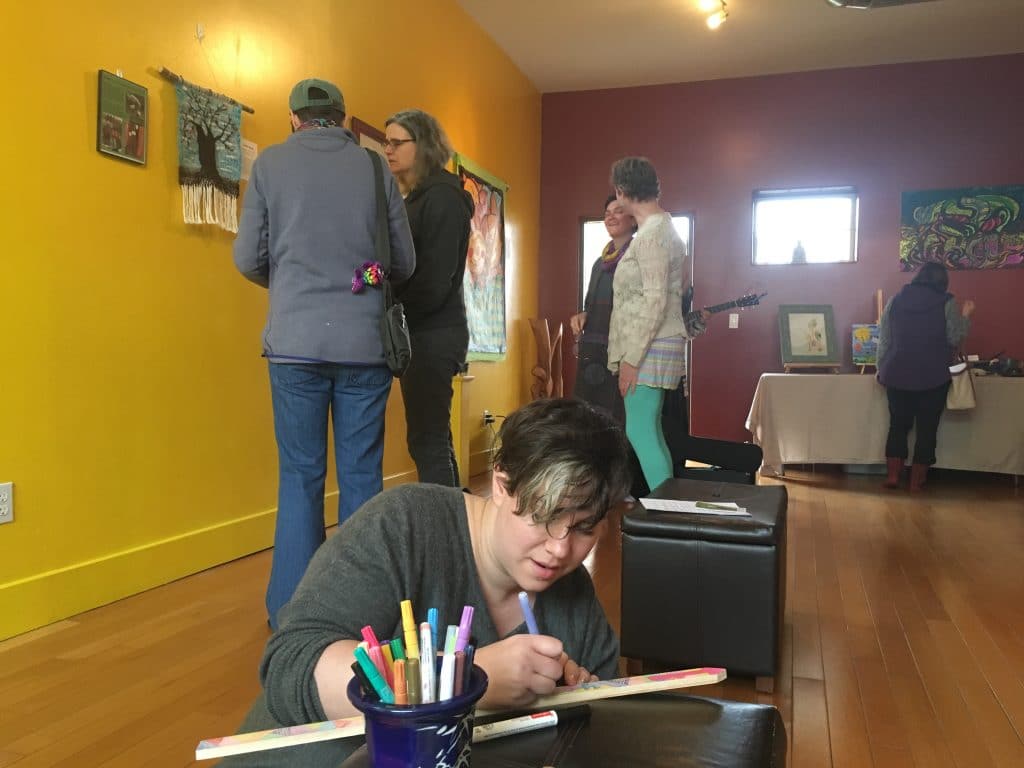 Most importantly there were so many friends, familiar and new, who shared food and garden cleaning for this new season in celebration of our friend who died earlier this year.

I had planned to read this aloud. But the thought got pushed back and back and then the evening was done. Maybe it was convenient discomfort, maybe just avoidance.

But here is an essay-tribute to Johnny from me.

Enlightened. Yes, he was wise and awake to his consciousness and spirit.

Bodhisattva. An enlightened being who postpones nirvana in order to benefit other beings and relieve their suffering.

On many a car ride John and I would discuss Buddhist philosophy and sutra. He would call me sifu (I taught him tai chi) or master. I would ask him not to.

He and I both revered the path of the bodhisattva and talked about ways in some future lifetime we might be blessed to be one.

After John died in a fire this winter, his family gave me several boxes of John’s belongings. 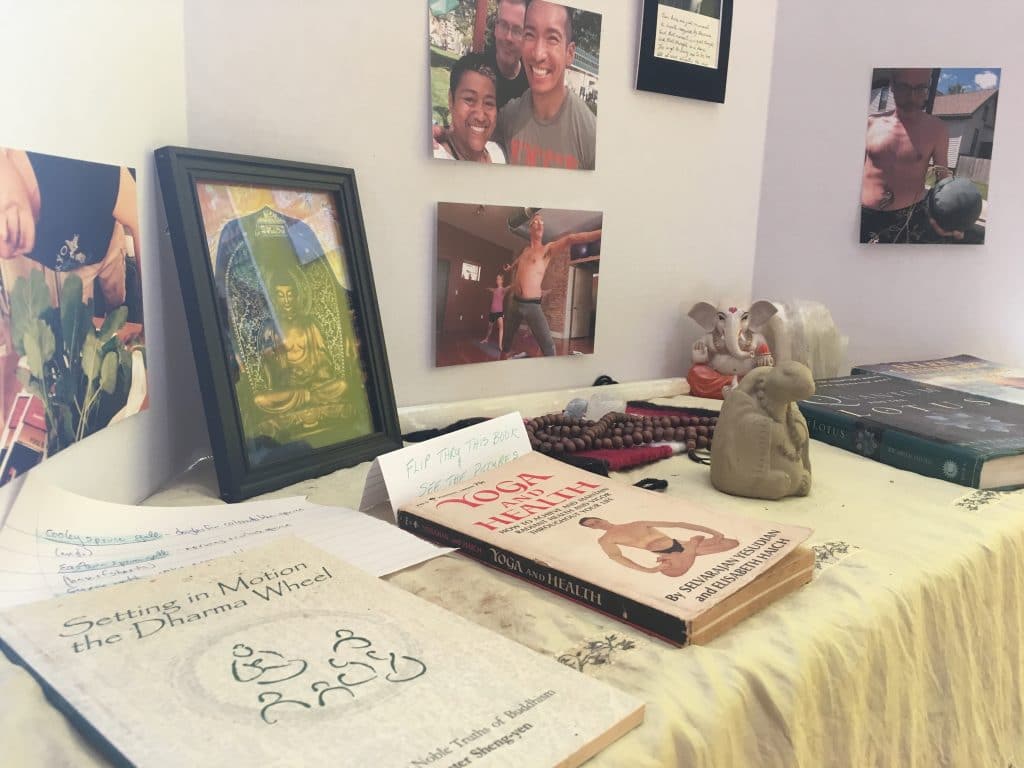 The boxes were full of books.  Used, second-hand, and library book sale books.

His sister said she had found a bunch of meditation books and wondered if I would like to have them.

There were books on Buddhism – Chinese Buddhism, Krishnamurti and others.

I sat among nearly 100 books that offered a window into the soul of their last owner, my friend John.

“Nonviolence for the Third Millenium” with a photo of Ghandi on the cover.

“Doing Good: Passion and Commitment for Helping Others.”

“Worldview as a concept.”

“The Theft of The Spirit.”

“The Elements of the Qabalah”

“The Secrets of Mental Magic”

I see the wandering sprouts of Johnny’s mind emerging in this scrap of paper.

A copy of “A policy of kindness” by the Dalai Lama. Inside the cover stamped “DISCARDED” and “Anne Carry Durland Memorial ALTERNATIVES LIBRARY, Ithaca, NY.”

Most looked as though they had never been opened. Or at the very least it had been a long, long time.

They don’t offer much insight. Some folded page ears. Highlighted segments that could have been from previous owners.

But no deeply revealing handwritten notes. No revelations. No chronicaling of life’s travels and spiritual journey. No deep secrets.

Mostly the size of the collection and the ripe aroma of mildew tell a story yearning, desire and treasure.

It’s the cumulative collection, their mix in entirety that offer glimpses into the spirit of John – the whimsy and the profound.

A book on “Fiscal Federalism” mixed in with a travel book for Malaysia, Singapore and Brunei. His social responsibility merging with his desire to soak up the diversity of our world.

A weathered copy of “Creativity and Taoism” contained freestanding pages from an unnamed book toward the back. The page numbers were early from whatever text it comes from.

Page 8 says “Naturally, the ideas of Kiekegaard pose many problems….is there not a tendency in Kierkegaard to rationalize and explain the paradox by present it as the union of the finite and the infinite?”

Page 12 “…background of Nothingness from which Being erupts…the experience of anguish, which he compared to dizziness…”

Soren Kiekegaard was a Danish philosopher from the mid-1800s widely considered the first existentialist. (I would learn after much Googling)

Seven forever stamps tucked into the back cover of “Essentials of Buddhism.” It, like many of his Buddhist texts read on the back: “Printed and donated for free distribution.” Forever stamps juxtaposed with the impermanence at the core of Buddhism can’t be ignored.

What a complex mind and heart of my friend.

A book about French author and philosopher Victor Hugo completely in Russian alphabet. Only the dates 1802-1885 led me to find it was Victor Hugo’s face when it came up on Google. 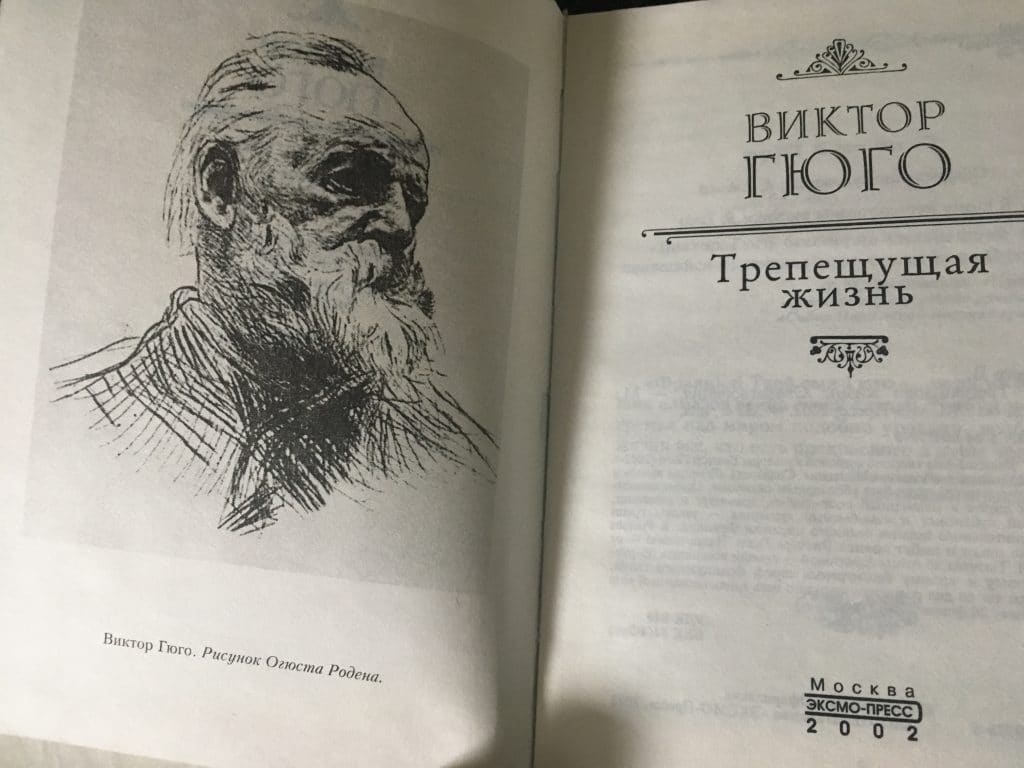 Yes, he wrote Les Miserable, so gay. Yeah, I get it. But was staunchly against Napoleon and the death sentence and even lived in exile for a while.

“The Quantum and The Lotus” a book that looks at where quantum physics and Buddhism intersects. How did he even find this book? Did he read it all the way?

The Selected Poems of Alan Ginsberg, 1947-1995. The first page I opened to started “under the world there’s a lot of ass, a lot of cunt.”

And finally the book, “Yoga and Health.” It’s a 1953 softback that was originally .75 cents. The illustration is of a white-appearing male. 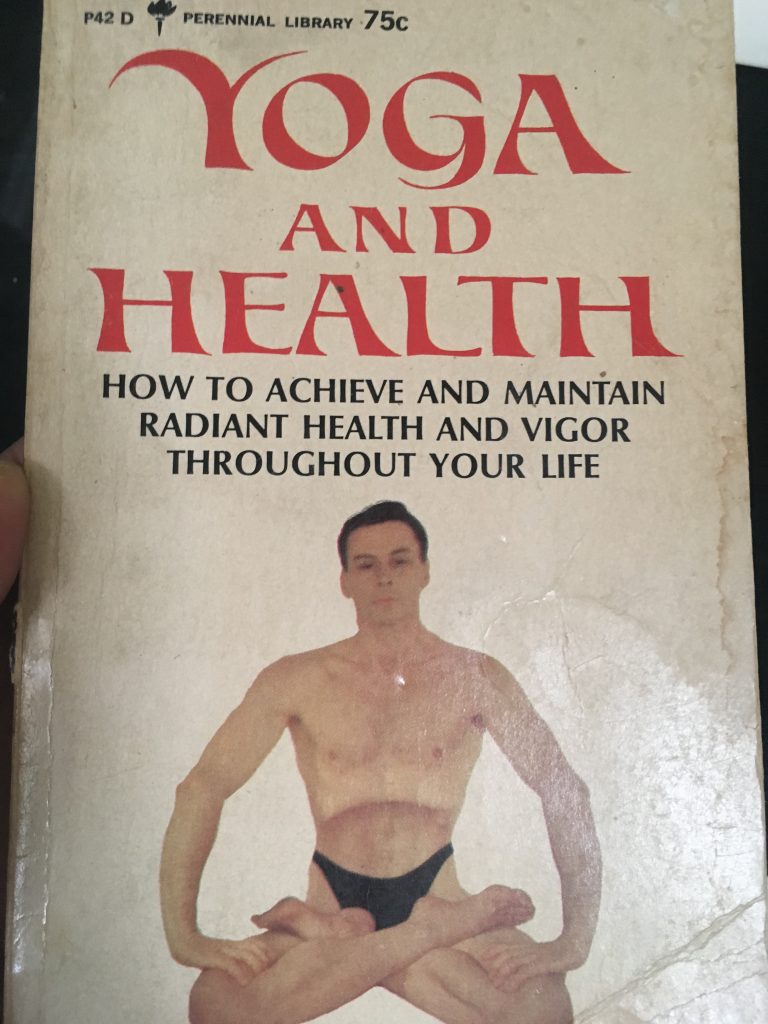 I don’t bother with the pages of text. The glossy photo pages beckon me. And my.

There is careful and sage instruction in the book but the photos carry the reader away into a fantastical physical experience. I can’t help but wonder if this was the birth of Johnny’s yoga or a lusty extension of his practice. 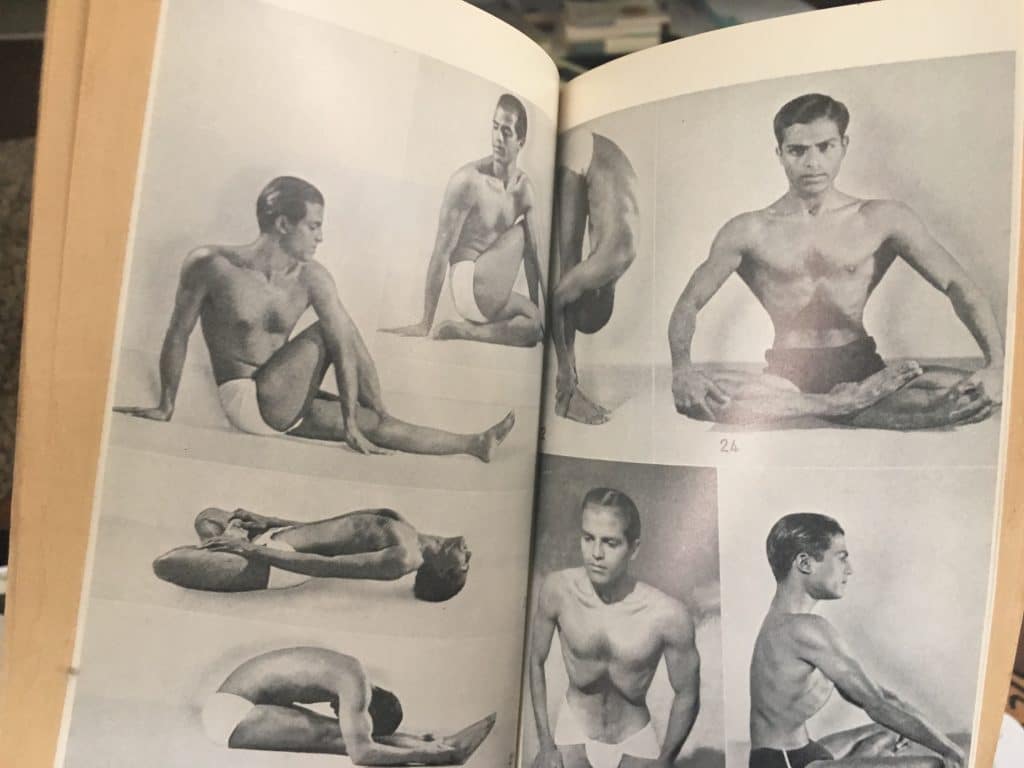 I arrive full circle. Experiencing the science mind and the studious spiritual mind and the physical mind of my friend, my student, my teacher.

To know John was to experience him and live WITH him. In his orbit, in his wake, in his slip stream.

The end result of exploring these belongings and collections only affirmed that I already knew my friend. He had an unquenchable thirst for knowledge. His spirit was constantly yearning for connection to the sacred and divine. His inner child craved laughter and play.

I step away from the mementos and books and reminders.

I emerge into this moment and occupy it with it’s grief and present awareness.

I am left with a warm blanket of familiarity and communing with my friend, in solidarity and spirit. In practice. In peace.

Thank you for teaching ME – Guruji Johnny.

Until we meet again.