Aura imaging: See the colors of your energy (or your dog’s)

Donna Aiken, of the Aura Center, will be at Just B Yoga Sept. 7 and 8 offering aura imaging reports. She will also be doing a special session Sept. 7 at Annabelle’s Pet Station offering reports for your dog!

Aura imaging captures your chakra energy colors in a photo. The report that Donna supplies analyzes the state of your energy in body, mind and spirit at that time. 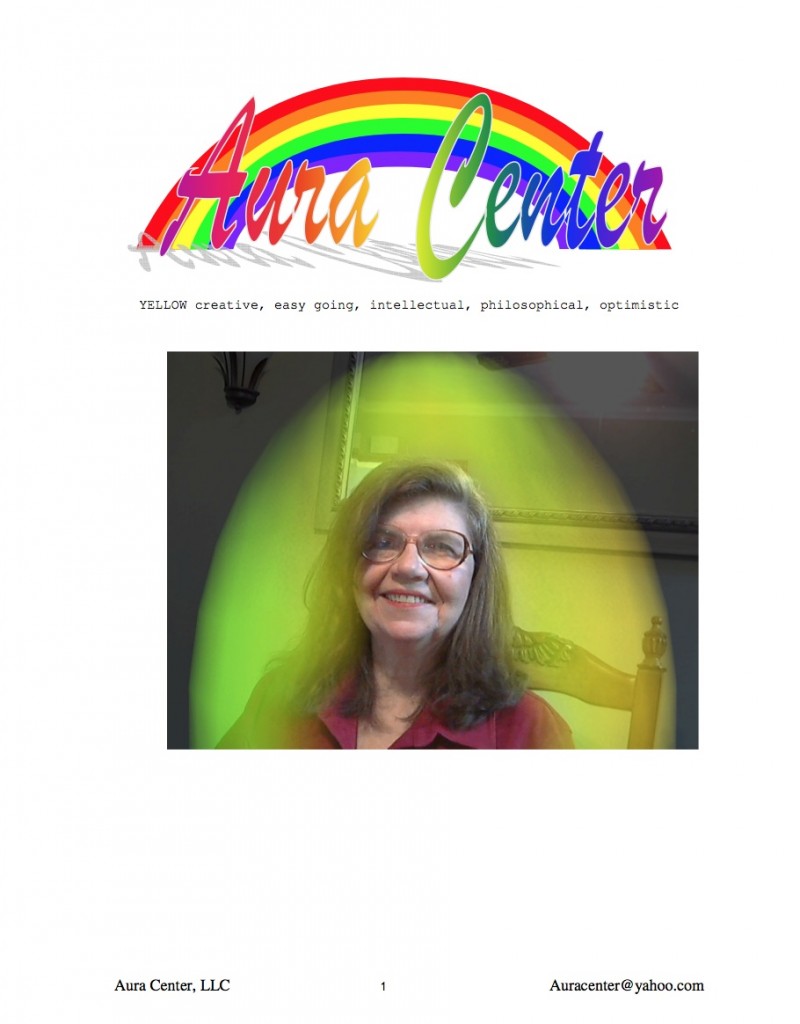 Chakras are wheels of energy aligned along our spinal column. They affect our personalities, our talents, our emotions and our spirit. There are seven chakras from the base of your tailbone to the crown of your head. Each chakra has a color associated with it.
Root chakra 1, red
Sacral chakra 2, orange
Solar plexus chakra 3, yellow
Heart chakra 4, green
Throat chakra 5, blue
Brow/third eye chakra 6, indigo
Crown chakra 7, violet

Donna started doing aura imaging in 2003. What got you interested in it?

I thoroughly enjoy it.
It all ties into all the healing modalities and learning I’ve done.
Esoteric healing. Reiki. Hypnosis. It’s all part of wellbeing.

This particular system is kind of appealing to the novice where they don’t get all worked up. I look at myself as a person who cracks open a door for somebody. And then they have a questions, “why am I here” and we look at this aura and I can tell them about it. And they move on from there or not.

I know my first aura picture had some colors in it that really changed my life because it said to me that I had some of these attributes that I didn’t think I possessed.

In my era, a Baby Boomer, you didn’t honor yourself. You didn’t think you were good enough, that sort of thing.

So when I saw my first aura photo, a Polaroid one, and I read the little two-paged printout on it, it made me stop and think. And that led me to the healing aspects of chakras.

How long ago was that
About 20 years ago.

Has your aura changed through the years?
It has and it hasn’t. My main body color stays in any one of the lower three (chakras) on a daily basis. And that’s what I try to do. I try to get the colors to where you are daily.
Not when you’ve come out of a deep meditation or had a great healing. I try to let you sit there for enough that you come back to where you are on a daily basis.
I work out of the yellow, the orange and the red, or a combination of any two of those
And I think I sent you, I was yellow that day but I have one right next to it where I was orange.

You were yellow but it was hinting toward a greenish hue. You’re kind of going up a little.
Sometimes I do go up to the green but not most often on a daily basis. If I showed you the whole body picture of that photo you can see on the lefthand side of the face photo that there’s a tinge of orange coming in.

The left is a tinge of orange, the right is a tinge of green.
I see a lot of that mixture of green. It’s not a bright green, it’s kind of a lime green.
Exactly.
That’s been happening with people this last year or so. And I look at that as that happy wonderful yellow intellectual yellow energy, and basically the energy of being at one, at peace with life and happy. And the heartfelt green energy of love. Green is more of a people-oriented healing energy, it’s a heart energy, it’s love.

What’s the difference between aura photography and Kirlian photography.

Kirlian is actually the camera. It is a special camera that is hard-wired to take the picture. It shows the energy. I don’t know that there is any true Kirlian cameras out there any more. Even those that are Polaroid they use a sensor with.

In the ones that are Polaroid, the sensor pings you and then reads the reverberation. 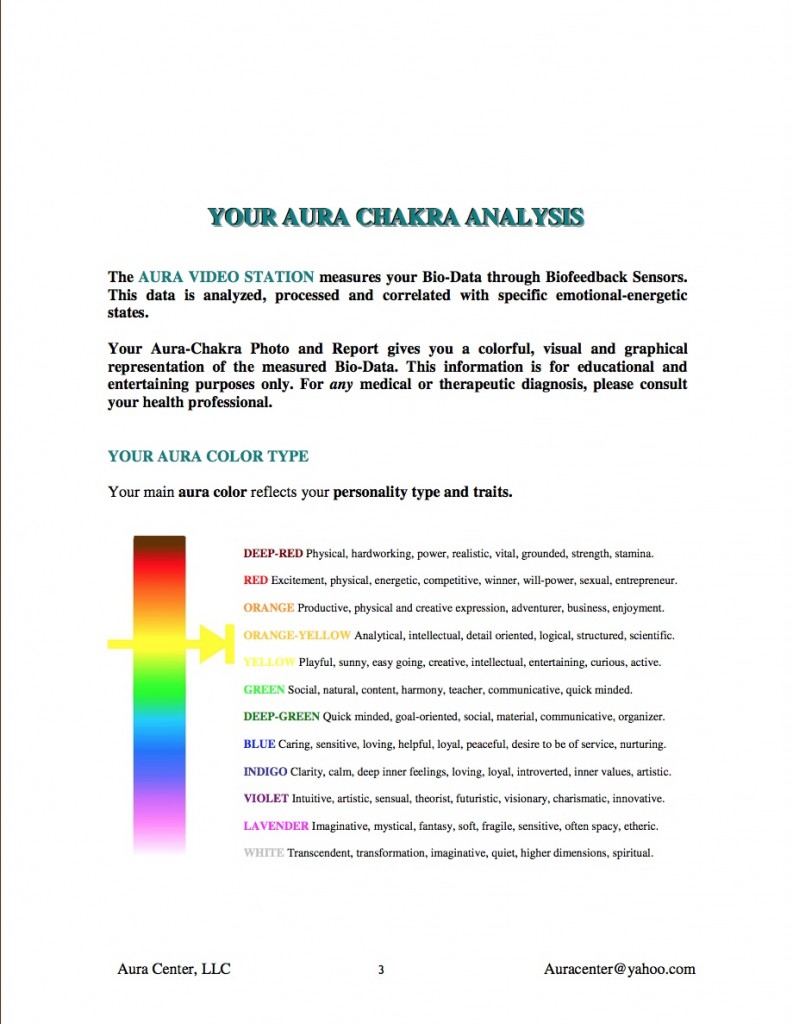 In mine, you are pinging the sensor. Your energy is pinging the sensor.
In my equipment you can sit and watch it change through the process until I stop it. And that’s why I sit and watch people. I let them sit there for a bit. They might sit down and start indigo blue and then end up being yellow. Because when they sat down they were in a little bit of different space for that moment in time. Any kind of picture is for that moment in time. As I sit there I watch them go through the various body colors and when the body colors stay the same I start watching. When that stops changing a lot, they’ll hang in one area a little bit longer, that’s when I stop it.

I do get some people who do literally pop between two body colors and it’s really hard. You have to really watch to see which one they’re really predominant in. Sometimes I have to sit there for a while depending on the person. But most often they get to who they are and they settle in and I stop it.

I did have one lady at the show at Birch Run, she was fascinating. Usually people up in the violets, lavenders, purples, they’re more out of their body energetically. There is a wheel that shows how much they are out of their body. Body, mind, spirit, those three things are in that wheel. People who go into the spiritual body more than 50 or 65 percent, their aura will pull very close to their body because they are protecting their physical body. And they’re really not here, in a sense. They’re really not here. You hear someone say, “Oh they’re spacey.” Well, or if they’re on psychotropic drugs….they’re out of their body. So they’re aura is going to be close to them.

I had one lady who sat down, her aura was out there at 100 percent. She was totally balanced. She was a third, a third and a third of where she should be in body, mind and spirit. And I started to talk to her and then I looked her and I said “But you already know all this.” And she said, “Yes, I just wanted to confirm it.”

So, she had this perfect aura that she could be here grounded and have her aura be fully out there but be fully connected to spirit.
That’s someone who is advanced in my book.

I always say thank you to the universe when I meet someone like that. It’s cool.

Why should someone get a report?
I would say for me, it told me a lot about myself.
The report goes into a lot of depth. It’s 22 pages. It goes into a lot of detail.
And it tells you about you. And sometimes, you say no that’s not me and then you stop and think “that is me.”
To me it opens your mind. It tells you where you are energetically and if you’re not balanced you kind of look at it and see “where am I out of balance? What do I need to work on?”

How did you get involved with doing reports for pets?

I moved and I was looking at people with this program. Then I got a new computer and I needed help with old program. And as I was doing that I saw that they had an animal program.
I thought well it’s a way to add to what I do. Other than the one dog show I haven’t done a lot of dogs. I probably did five or six there and they were bulldogs. It was a bulldog show.

What will the dog aura image tell the owner about their dog?
You look at the, there’s really no report in these pictures. I’m trying to open this (she’s on her computer). I’ve got this bulldog that I’m going to use for comparison here.
This dog happens to be orange with yellow above his head and blue on both sides.
Of course blue balances out the orange which means it’s a dog that is adventuresome and is confident and figures things out quickly.
But you can look at where his energy centers are low and where they’re high just like I would with a person. And how open is he to…orange is a grounded color. And he’s 20 percent in his spiritual body and 40 in his physical and the rest in his mental body.
And as far as dogs you think they’re not thinkers. but they are somewhat. They can figure things out. However his personal power, this little bulldog, his solar plexus was pulled way in and so was his throat chakra. And the rest were fairly even.
He’s smart and he’s adventurous, it says he’s confident but he’s not showing his personal power right here.

So when I’m looking at that picture. And I see the box that says “state of mind-body.”
That’s whether she’s stressed mentally or not.
She was at that time. She was laying there.
You see her ears are not exactly up. But she’s not bad. She might have been running around or doing something with the other dog and gotten stressed out too. I don’t remember.

The diagonal line is leaning more toward the negative side. So the negative side is the stress side. The plus side is the calm side?
Yes, that’s the more at ease. But it’s more what goes on inside of them than the outside. It’s a mental thing. Above that, you have the level with the two – the green and the blue. The blue is the environment, the green is you. She’s OK with that. She’s OK with the environment.
Neither one is real high.
In the left-hand corner.
That’s how relaxed you are in relation to where you are. She wasn’t real high energy when I took this picture.

So even through in those bar grafs, those are the corners of the body. She’s mellow in how she handles things. She’s not a very vocal dog.

And then the other bars below are each chakra and the percentage of energy going through them.

So green looks dominant.
Yes, that’s her heart. She had her heart wide open.
And then communication, no, then third eye.
Yes her intuitive space.
Her throat and her sacral look balanced.
Those two balance themselves out.

She’s more in her heart than she is in the grounded root chakra. She leads with her heart.

For the dog sessions, will you print a copy?
Yes, it will be on a full sized photo paper, 8.5X11.