I’m probably not going to be very popular here, but I really feel strongly about this and believe I have a different viewpoint to share.

I created Just B Yoga as not only a donation-based yoga studio, but a space that was open and accessible to every body.

That might be a lofty goal, but needed, as evidenced in this recent blog post by Jen Caron that is drawing lots of criticism on the internet.

“It happened to me: There are no black people in my yoga classes and I’m uncomfortable with it.”

I think this is a case of the messenger being slayed and the message ignored.

I agree with Caron, we need to create accessible spaces for practice. We need more diversity in yoga studios across the nation.

I practice yoga. I am a practicing Buddhist. I practice tai chi.
I have been heavyset in my lifetime. I’ve been athletic and not.
I have had money and I’ve been without. I’ve had heterosexual relationships. I’m now in a same-sex relationship.

I’ve always been a person of color and I’m often among the minority (in EVERYTHING, not just yoga).
But I’ve never coveted being skinny or white. I’ve never felt uncomfortable around skinny white people.

That’s where it appears Caron has some assumptions in her blog that have triggered some strong reactions from the black community. Some are breaking down her post line by line with anger and venom as in, “An open letter to the xo jane writer who cried about a black woman in  her yoga class.”

I agree with the thoughts in this reaction, “Yes Jen, Black women practice yoga.”
But I disagree thatCaron gave much “thought” to her  piece. She was sharing her own feelings, her reactions, albeit publicly for all to see on the internet.

Intentionally malicious? I don’t think so.

This writer may have hit it on the head best about Jen Caron’s “honesty.”

But I’m not mad at Jen Caron for her blog. As a matter of fact applaud her bravery. (I wince at the boos and hisses I expect from this)

In order for us to open conversation and start to heal and change, we have to be willing to speak and LISTEN skillfully.

Who gets to speak for diversity? Only the minority group that’s seeking equality? Can the majority be a part of the voice for change? Do we value the voice of the uncomfortable majority?

If I take her at her word, she wants to know more about diversifying studios and making everyone comfortable – even herself. She had to admit her discomfort and she probably has barely scratched that surface.

Often the first utterances and expressions, like the first notes from a child with an instrument, are not polished but are some of the most honest.

I approached the reading, comprehension and consideration of her blog as practice – with humility, compassion and loving kindness. 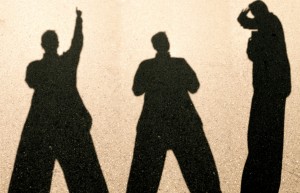 I read her blog multiple times and sat with my emotions and reactions and read on top of the lines and in between them.

I feel her point was at the end: “The question is, of course, so much bigger than yoga—it’s a question of enormous systemic failure. But just the same, I want to know—how can we practice yoga in good conscience, when mere mindfulness is not enough? How do we create a space that is accessible not just to everybody, but to every body? And while I recognize that there is an element of spectatorship to my experience in this instance, it is precisely this feeling of not being able to engage, not knowing how to engage, that mitigates the hope for change.”

I am an advocate of diversity.
I firmly believe we need all of us, not just people of color, or size or various gender identifications, to be the voices for that diversity.
But we don’t encourage diversity by chastising a person who is noticing a lack of it.
So skinny white women can’t desire to diversify the image of yoga?
Do we want her to hate herself for being skinny and white?

Or do we not believe a skinny white person can actually desire diversity and equality without wanting everyone to eventually become her body type?

True, Caron makes assumptions about what’s going on in the mind of the black woman. Assumptions are always dangerous territory.
But I think that’s where I need to practice forgiveness and choose to move the ball down the field and not be distracted by her assumptions.

To me, Caron’s blog post and the reaction to it, highlight the chasm that is enormously deep in our society.
We need to bridge these gaps in thought, speech and in action.

It’s time for us to notice our differences and not feel shame or envy or superiority or inferiority.

“Notice the noticing,” Nikki Myers often says.
Can we embrace the need for change and all of us pick up a share of the load to make the change happen?

It takes a village. Do any of us believe that shit or just like to say it? Is the village an exclusive club?

Can change not mean subjugation, subordination or substitution?
Can we eliminate “them” and fully embrace “us”?
That’s in terms of race, privilege, money, body, sex, gender…everything.

The final segments were on why classes for bigger bodies are needed.

I’ve been reflecting on that about a lot of the classes we offer at Just B Yoga: Yoga 2eXceL for bigger bodies, LGBTQ Yoga flow, 40+ Yoga. These classes are not meant to segregate or marginalize anyone. Instead they are meant to provide a safe space, a haven to nurture the seeds of practice with language, modifications and mindfulness.
We are about creating community, not classrooms or CLASSES.

I want to practice my practice, and that requires me to pause before speaking or reacting, even when the wounds are generations old.

I encourage Jen Caron to look up and visit all kinds of yoga studios around the country  if she can. Explore them online. Those that are in racially diverse areas and those with different economic models (nonprofit, donation-based, cooperatives).

Give me a call or drop me an email.

I’m happy to talk to her about the community we are cultivating here – I won’t say that we’ve succeeded at anything.