Flying with Eddie and his whale

Eddie Lahti is the creative force behind Just B Yoga’s  newly designed shirts and stuff. 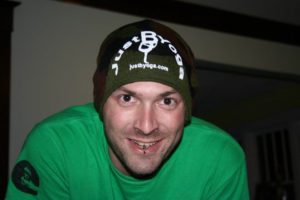 He is the reason you guys love the Free Being and Human Being racerback shirts.
He’s never taken yoga at the studio but he’s a one of our yogis nonetheless – a  Being of Justness if you will.

He’s embraced me and our mission since we met and we discovered two amazing friends we have in common.
His energy is infectious. His creativity something to envy. His juice for life unmatched.
I love sharing time with him. It’s an energetic creativity jam session. He squeezes the seconds out of minutes with a time-stopping level of presence.

Now, let me tell you about Ed’s Whale. 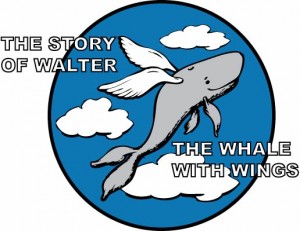 See Eddie is a poet and writer. And his literary self gave birth to a children’s book Walter the Whale With Wings.
If you can’t love a whale with wings, stop reading now.

See, I haven’t gotten to read the book but I already believe in Walter.
Of course a whale wants wings. They need to fly away from ships with harpoons and oil rigs that spill poison.

Of course a whale wants to fly – or would it glide more like turkeys? (So don’t drop them out of flying vessels like Les Nessman on WKRP. That would be bad.)

Of course a whale, the planet’s largest mammal, believes beyond what we say is impossible and aspires to greatness on pure trust and faith. He breathes air and can swim to the bottom of the ocean. She breathes air and gives birth under water.

And if we saw Walter with his wings, would we congratulate him?
Would we ooh and ahh in wonder?
Would we believe in powers greater than we can see or touch or create ourselves?
Would we help him learn to fly?

Could we share his dream and be happy for him and not steal his gift or deny it happened?

Eddie does.
Eddie dreamed the possibility and wrote it and drew Walter to life with pen and paper.
From Eddie’s mind and spirit Walter’s dream flew off the page.
Eddie saw the potential of dreaming and seized it to help us believe beyond our eyes and our own limitations.

He has cried, winced, laughed, loved and created with this disease. He’s gone toe-to-toe with it. He’s launched war against it. He stood his ground as a living being and chooses life. 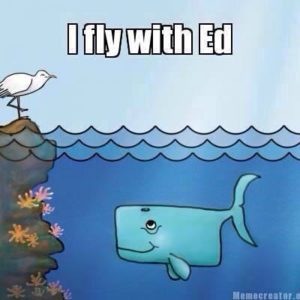 And all the while he stays focused on family and Walter the Whale With Wings.
Eddie went into hospice yesterday. I don’t know if I’ll get to share his laughter and wit again.

But I am sure of a few things.

Eddie is living, not dying.
And I know Eddie will get wings because he gave them to Walter.

Eddie believes in a whale with wings and so do I.