Finding my groove with seniors and yoga in south Lansing 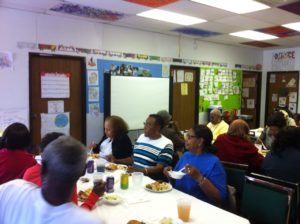 I love events when I address everyone with “Yes ma’am” or “Yes sir.”

And everyone I speak to is “Ms” or “Mr” first name.

Being around seniors brings out the manners and good-natured joshing that I was raised with.

Thursday I shared yoga and tai chi at a senior luncheon at the South Side Community Coalition on Holmes Road.

It was a gathering that fell somewhere between a church social and a senior health outing.

There was plenty of food.

They chatted it up and went for seconds. 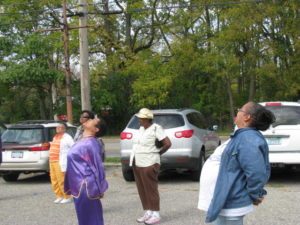 I almost wasn’t sure if they would even be interested in hearing about what yoga and tai chi were. (Much less move after that meal)

But I was wrong.

I asked the group who knew what yoga was?

Who knows what tai chi is? 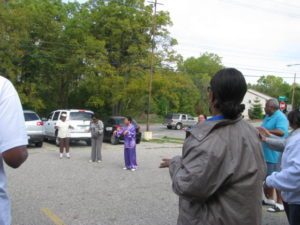 So much for what I thought!

They were very engaged through the presentation.

They asked great questions as I explained how accessible yoga, tai chi and qigong are for us as we age.  They were open to learning about programs available to them that they could afford. Several had double knee replacements and hip replacements. There was one woman with two detached retinas. But don’t count them out. Many had already walked that day – some more than six miles!

After lunch we went outside and practiced a little qigong and yoga. I kept it light since they had just had a big meal.

We found some emptiness exercises to get loose. 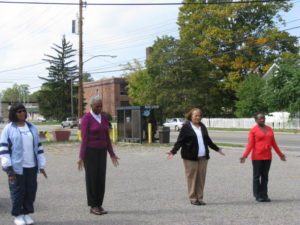 Some hip exercises revealed some of them didn’t need to get their groove back. They had never lost it!

We played with some balancing exercises and some standing yoga poses like mountain.

It was the most fun I’ve had in a long time.

It was made even more special by their lack of inhibition to gather in a parking lot on a busy Lansing street in a circle doing exercises that sometimes looked downright silly.

I was reminded not to take anything for granted and that our practice of yoga or similar arts doesn’t have to be complicated or difficult.

I will definitely be back.