Saturday, January 21st, 2017 was shaped, for me, by this animating question: What is the relationship binding social action and yoga?

In the morning at Just B Yoga, B led us in an empowerment flow. On our mats, we moved and breathed to songs born of the anti-Apartheid freedom struggle. Voiced from within the movement, these songs carried the struggle, hope, and soul of a people in pursuit of survival, justice, and freedom. They manifested active nonviolence in the heart of the most abusive of legal, social, economic, and political structures. From the birthplace of humanity, at the southernmost tip of the African continent, the cry of freedom echoed outward, calling the international community to a greater awareness and a deeper reckoning with its complicity in global systems of social and economic oppression. They said: “see and hear how our cities and our families have been torn apart by your ‘development.’” “Khawuleza, mama!” “Senzeni na?” What have we done to deserve such abuse? In this human family, we are all subject. With breath and movement, these songs call us, however “us” was or is or will be understood, to account for our deeds and rise to nobler heights. 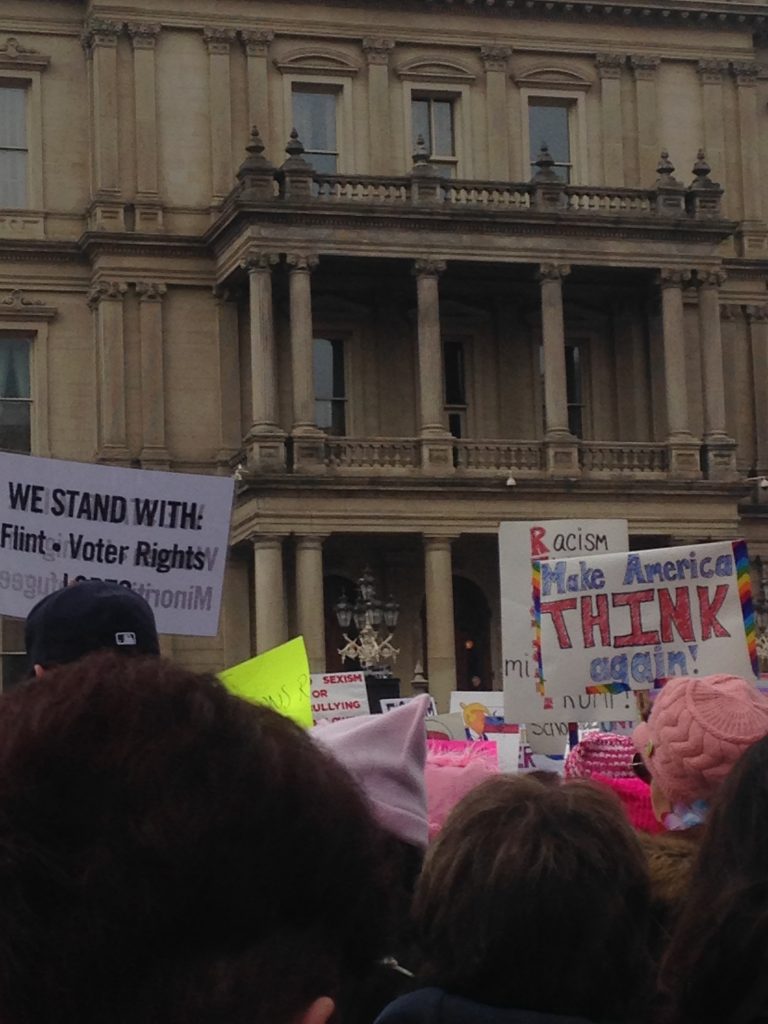 Singing begins with breath. On my mat, I breathed. My heart sang with Miriam Makeba and I contemplated the dramatically different definitions of “power” manifesting themselves in the world around me, and within me. What is it about softening into a posture that strengthens?

Off the mat, I met and joined my colleagues who, on this day, were coming together for the first time to begin a journey into yoga teaching training. Together, our small group took the decision to join the Women’s March and embarked on our walk from the studio to the Lansing Capitol building. As we walked, we worked to clarify our motives, our inspirations and our dreams. Never did we claim to be the same, yet the pursuit of a question united us in dialogue. I imagined all of the human beings around the country and the world who also felt moved to join what became one of the largest days of protest in US history and globally. Women-led marches took place in more than 600 locations, spread across the seven continents of the world. We were joining them, in their tremendous diversity of experience, expression, and intent. We joined them in the quest/ion of social action, in the struggle of “chaos or community?” that must be faced by a global people awakening to their shared humanity. I wonder who they’re talking to. For some, social action of this nature is an “exciting experience.” For some, “social action” is living and surviving in the bodies God gave them and the circumstances into which they and their parents and their ancestors were born.

Outside the capitol, I observed and heard and felt the different motivations and concerns of my fellow marchers as they stood in the sun, walked through the mud, held and hugged and greeted one another. There is nothing more beautiful to me than people who care about people. Sometimes, their hopes were intoned with notes of despair. Sometimes, the cry “freedom,” was reduced to the protesting of one man’s inauguration and the “others” who let it happen. Advocacy efforts are too easily co-opted by the falsities and loss structures of partisanship, of gender binaries, of white supremacist structures in a sensationalized market culture.

This is the challenge for those of us who believe in unity as an active principle, and not as a rhetorical tool to silence those voices who have been written in as “outsider.”

“Showing up” is complex, and just as two bodies who look the same in a yoga posture will always feel it differently on the inside, it is easier to claim unity with our physical presence than it is to advance a unity of thought and action capable of aligning words with deeds and principles with practice.

What does it mean to have a world-embracing vision? How do we locate the voices of the vulnerable? What are the crying needs and unique opportunities of this Day? What is the source and meaning of our power? What substance and programs and policies will fill our slogans? These are movement times. As the world of humanity is able, in this day, to truly envision itself as one body, united in spite of the falsehoods of national borders and false hierarchies that have displaced and governed for centuries, how can our actions, individually and collectively, come to embody the principle of the oneness of humanity?

Yoga is a process of unification; it means “union,” the communion of breath and movement, body and mind, the reconciliation of the fragmented, disparate parts of ourselves into a whole. If yoga doesn’t humanize, it is not yoga. And humanization is, for me, the sole objective of social action. The distance between the minds and hearts of these bodies, of my body, gathered together for a common-cause-in-the-making, is a source of motivation, a challenge and opportunity that lives in the vision of the beloved community.

In the past, the study and practice of the life system of “yoga” began with moral and ethical teachings. Long before the asana was introduced, the spiritual prerequisites to movement were clarified. In a time when the material advance of civilization has far surpassed that of its spiritual development, I believe it should be the charge of every individual to place moral and ethical teachings at the center of definitions of progress, and to commit, through dialogue, to clarify the meaning and practice of “progress” and “development” wherever it is invoked.

Yoga requires of us the sacrifice of a material attachment to self, in the service of a higher purpose, an ongoing, moral becoming. It is “the true union of our will with the will of God.” Undertaken as both individual and collective practice, in the context of community, it is social action. Social action, when uncompromising in its belief that every soul was created equal and noble, when seeking to advance social, material, and spiritual conditions for all people, and especially the vulnerable, is yoga.